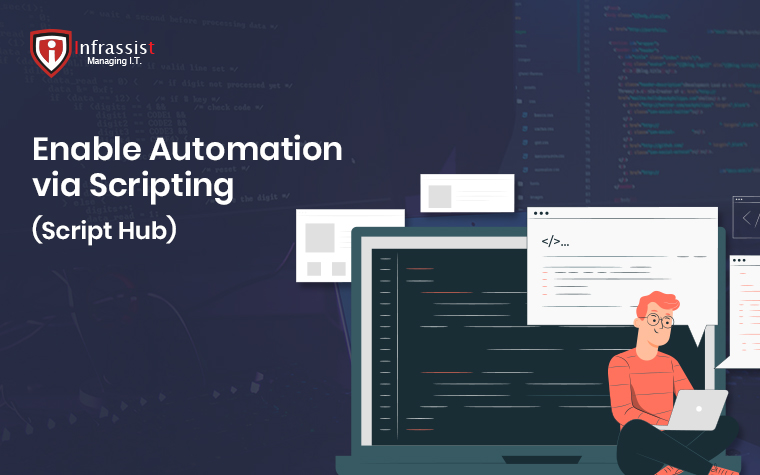 Reasons why you should Script and Automate

What is Scripting and Automation?

Many organizations prefer automation not to reduce their staff count but because they want to do more with their existing staff. Enable Automation via Scripting and it can save time and reduce man-hours on repetitive tasks. The mundane IT tasks will not coincide with employees’ routine tasks. The admin can run a script and operate and execute a single operation for multiple workstations. A Script contains a launch point, a source code, variables and syntaxes which has binding values.

Why Scripting and Automation?

Let’s assume that XYZ Organization has 100 people in their organization, and there is a need to install a particular software on all systems, you can do that by running a script.

Application Installation Script helps you do that. This script can be modified according to your organizational needs; one has to change the URL and name the software they want to install. Run the PowerShell script and it will install the software silently and the employees’ work will not be hampered.

Assume that XYZ Organization wants to clean up all temporary files and junk files from their users’ system, XYZ can execute the action, at once by running the Disk Drive Cleanup Script.

Have multiple users been moved from or left your organization but their user profiles are still active? With the Delete Unwanted User Profiles script, you can delete User Profiles that have remained inactive for X number of days. The days can be modified according to your needs

These are just a few of the many functions a script can enable you and your organization.

The main aim behind creating a webpage/ a Script Library is because we want it to be a one-stop-shop for all your scripting needs. The PowerShell Automation Scripts we have uploaded on our Script Hub Web page range from Scripts to clean up C drive to scripts that create bulk users in the active directory.

And if you do not find a script that you were looking for, you can even send us requests citing your requirements. Enable Automation via Scripting using our PowerShell scripts to smoothen your operations, while we take care of all the back-end technicalities.

We’ll be adding new scripts to our Script Hub on a monthly basis. Our Script Library also gives you an option to Subscribe, so that every time a new script gets uploaded on our website, you’ll get notified.

Our intention is to make our Script Hub a one-stop destination for you to find various Scripts. Our Scripts are a culmination of scripts and syntaxes we have gathered from various sources over the Internet. Although all the scripts uploaded on our website have been tried and tested by our team of engineers, we do not guarantee seamless execution. PowerShell Scripts don’t work on a one-size-fits-all concept, with the intricacies of Managed Service Providers (MSPs), it can be rather difficult. Some scripts might work well for one and not for another. We suggest you run a scan before executing this in your system.

Revathi is the Marketing Communications Executive at Infrassist. She joined us as a fresher and is responsible for in-house as well as external marketing. She generates Inbound leads through her content generation. Branding and Advertising is her area of interest with the gist and curiosity to learn new things.